I rarely shoot on locations, always feel more comfortable working in the studio. In most cases there is a power outlets on location, I had only a few where it was too far from the lights (warehouse freezer, for example). With no external power I’ve used 4 Canon speedlites, but they too weak to be used with serious light modifiers or on a large objects.
It makes me feel very uncomfortable when I do not have enough power:-)

So, I was looking at Vagabond II or similar portable power solutions, but did not find the one I like: it should be powerful enough to run 3-5 strobes equal to X1600 (1600 effective/ 660 true WS) for at least 300 pops and to be not expensive, as I won’t be using the system often, therefore do not want to invest lot of money in it. 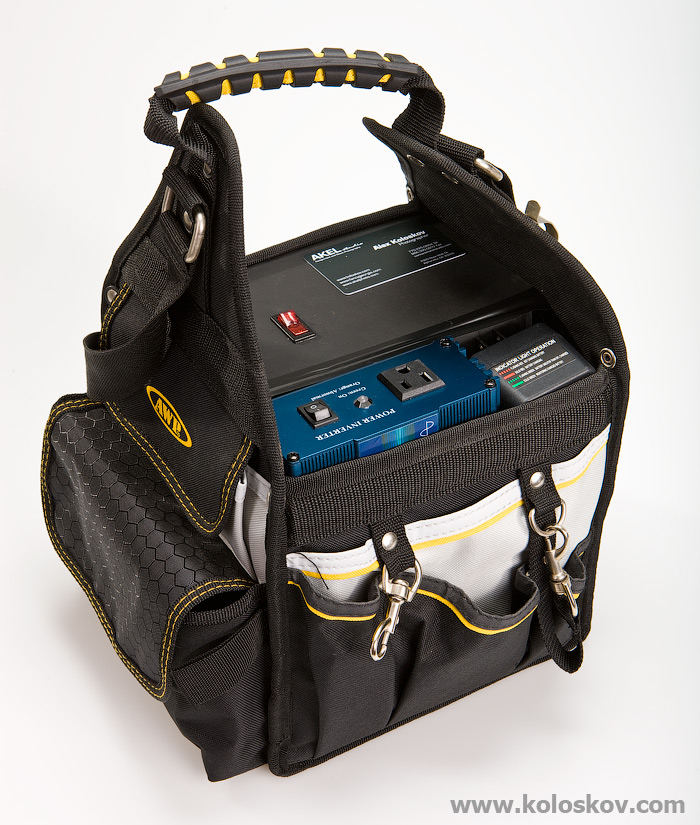 After researching and reading Vagabond II specification and reviews I found that I can easily build an equivalent of vagabond II with more powerful battery and inverter (not the inverter: I was thinking vagabond II has 150 W one, but it appears that it has 400W inverter) for a less money and more fun.
I am not the first who did it, I found this simple guide to be the most helpful.

Yes, I won’t have any customer support or warranty for the whole thing, but the enjoyment from making the thing myself will cover all the drawbacks:-)

Here we go, the ingredients:

The power inverter: I know it should be a pure sine wave inverter, so I’ve tried Sunforce 650 watt, right from Fry’s. This was the wrong step, as it did not work with more then 1 x1600 strobe:
At the beginning of each recycle, each X1600 WL unit will draw a peak current of about 18A for about 200 milliseconds. With 3 units connected, a draw was much more then 650 watts, and inverter shuts down to protect circuits from overload.This is the key, our inverter should handle it differently: reduce the voltage under the heavy load, this will give enough time for capacitors to be charged.Unfortunately, this is no such information can be found on the inverter specification, only our community mind can help us here:-) Correct inverters are made by Samlex America. The 150 watt model is exactly  (at least some people believe so) the same unit used in Paul C. Buff Vagabond II system (Update: I was wrong here, 150 W on vagabond I, and 400 W on Vagabond II).I bought PST-30S-12A (300 W) model here for $140 shipped.
The battery: Vagabond II has 20 Amp Hour(s), so I went for 35 Amp Hour(s).  It should have enough juice to run for 75% more pops than vagabond, but still to be not too heavy or too big for more or less comfortable use.
I’ve got Powersonic PS-12350NB (almost like a Panasonic, but cost 35% less) battery: 27 pounds sounds just right for me:-)
The battery charger: Following Jacob’s advise, I’ve got SUPER SMART BATTERY TENDER JR. for $20 shipped. 700 milliampere should get a full charged battery in one night, and it also has car adapter if you need to do it during the trip.
The bag (AWP 8″ Electrician’s Tote – the link is for 10”x8”, but I’ve got 8”x8” bag) and miscellaneous accessories such as a wires, switch, etc I’ve got from a local Lowes store.
Wooden plates, black mate paint, a soldering iron (I’ve used a torch light), two hands and two hours of  my time between my lovely family and my precious tools were enough to complete everything. 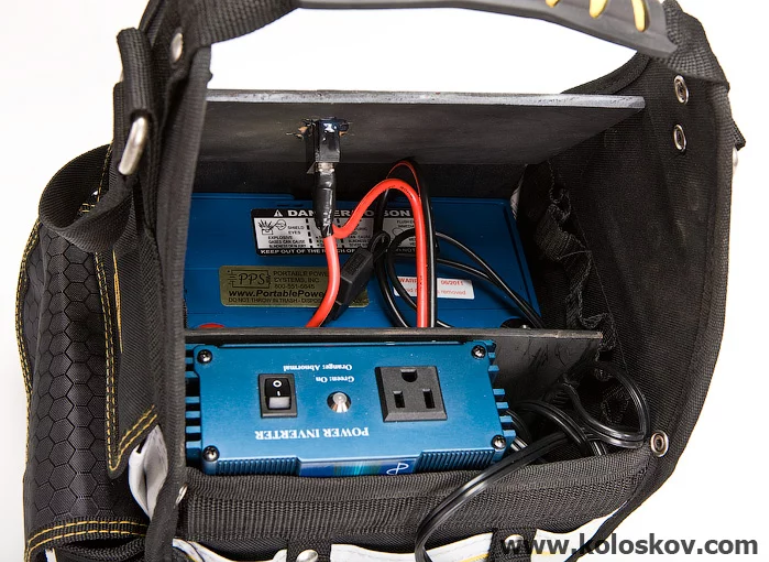 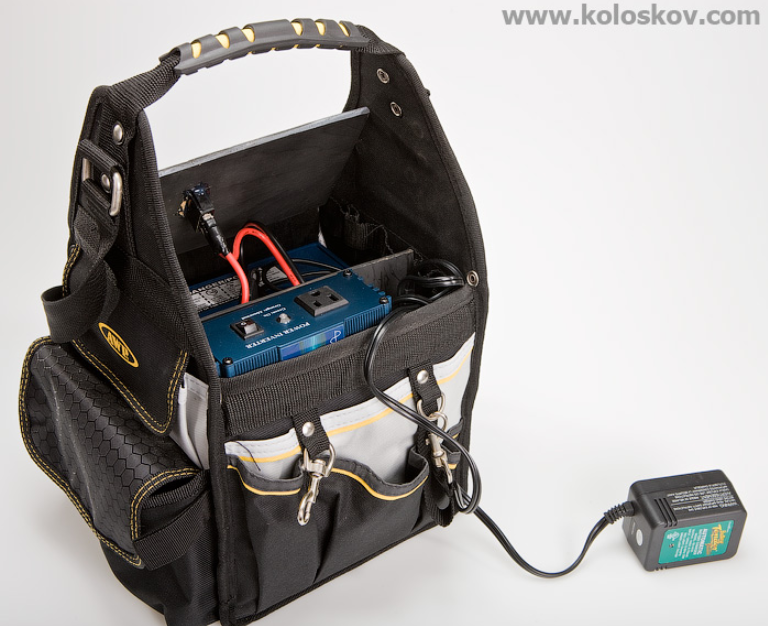 A little bit more explanation and some tests (2 x WL X1600 and one AlienBees B400 connected) is on the top video. (I guess this is time for me to invest in my English, it is a shame how I pronounced “sine”… 🙂

Let me know what do you think… If you have made something similar, I would be glad to post here your experience: just give me the link!

I was asked few times for a circuit diagram of the device, so here we go. I’ve added a fuse and a voltmeter to it: I do not have them yet, but its on my to-do list.

Today (12/14/10) I’ve received an update from Samlex, I think they have some interesting info for those who used/thinking to use Samlex inverters in the DIY powerpacks.
Here it is:

We looked at a fix from one of our R&D engineers. It was a simple fix of adding of a thermistor to the AC output. It certainly dramatically lowered the current load presented to the inverter from the strobe, in this case a single 250 Wsec unit). 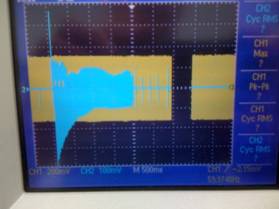 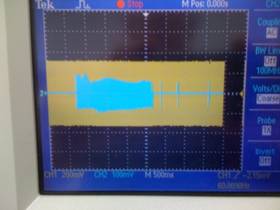 While this looks great for this application (powering a strobe) it is not ideal for all applications which this inverter gets used for, and end users will be using higher power and multiple strobes which will continue to stress the output components with the end result of lowering the life of the unit.

We are going to try a few of these modified ones out with customers short term before we make any final decision, medium term we are providing users the attached with recommendations in section 7.11:

So, it looks like the new revision of samlex inverters will work better for powering strobes…
I guess I may send mine for a replacement, but after few extensive runs I am going to do while having fun on Key West.. going there in 4 days:-)

The unit (Samplex inverter) has died working with 2x640Ws lights at full power. Died after 5 pops. talked to Samlex engineer and was surprised to find that this 9inverter not suppose to work in such application. Go figure now:-)