Does a physical sensor size make a difference? 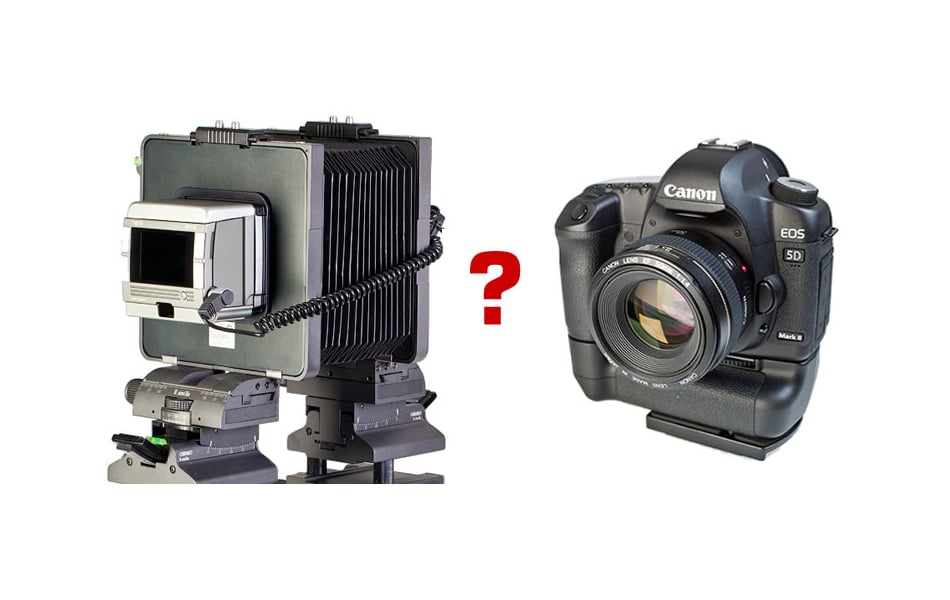 As promised, I run few in-studio tests to see if there is any noticeable difference in IQ between 35mm DLSR Canon 5D mark II and Phase One p25+ medium format digital back. This comparison makes more sense than the previous one between Canon 1Ds Mk III and Hasselblad H4D-50 I had earlier.

Both, 5D and P25+ have 22 megapixel sensors, and the only difference is Canon’s 14 bit per color versus PhaseOne 16 bit and a physical sensor size.  The size of P25+ sensor twice as large as Canon: 48.9 x 36.7 mm vs 35×24 mm, pixel size are 9µm vs 6.4µm respectively. Larger pixels should have better noise to signal ratio, meaning better colors and less noise, especially in underexposed areas. Also, 16 bit per color should have better color accuracy and be better in  recovering underexposed and overexposed areas. The last major difference is that PhaseOne does not have Anti-Aliasing (AA) filter, which  potentially should bring more details on the output image (less blurry) and opens doors for moire issues.

Mine on the right:-) 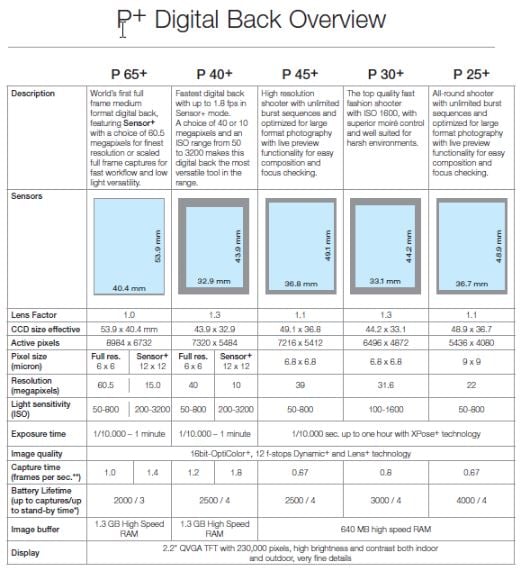 Few notes about the test: I did not want to run a pure “isolated” sensor-to-sensor comparison, meaning to have both cameras on the same lens. In real life, I doubt that anyone will use Canon  with large format Schneider 120mm macro lens, and P25+ can’t be used with Canon lens at all. Instead, I’ve used the best Canon macro lens, 180mm F3.5 L macro and one of the best and sharpest macro lens (non-digital) for technical cameras, Schneider 120mm macro Symmar HM mounted on Cambo Ultima  D.

Yes, Canon macro lens has better liner resolution by it’s design, as it produces about 10 times smaller image circle at 1:1 magnification than Schneider. Not really equal comparison, but I always prefer real life scenario over the synthetic tests.  The question I was looking to answer was this: will I get better IQ from the Cambo + Schneider + P25 set than Canon can deliver with its best macro lens?

I’ve used Capture One (C1) software to shoot tethered with Phase One P25+ and to develop 16-bit uncompressed TIFF files which was converted in Photoshop CS5 into JPEG and then combined into one image with Canon samples (different layers of one file). Default setting on C1 converter were used.

For Canon I was using Adobe Lightroom for a tethered shooting and Adobe Raw Converter and Photoshop CS5 to generate  JPEGs. ACR was used with all default (except WB) parameters. Obviously, all the numbers are very relative, but I did not want to use ACR for P25+ images: only Capture one provides the best raw conversion for PhaseOne images. 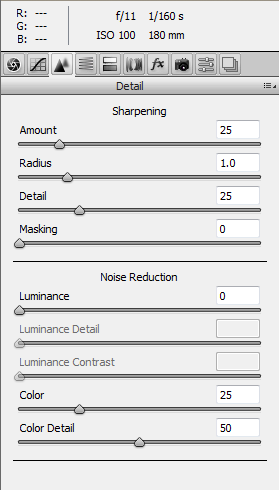 I’ve used Elinchrome RX  strobe lighting (comparison-review will be posted soon) was used for this test, and I was adjusting the lighting trying to match the exposure for each camera using histogram and highlights and shadows warning. 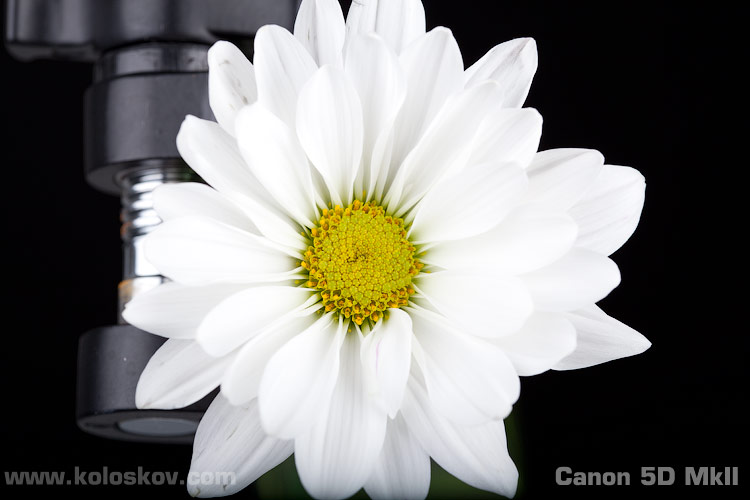 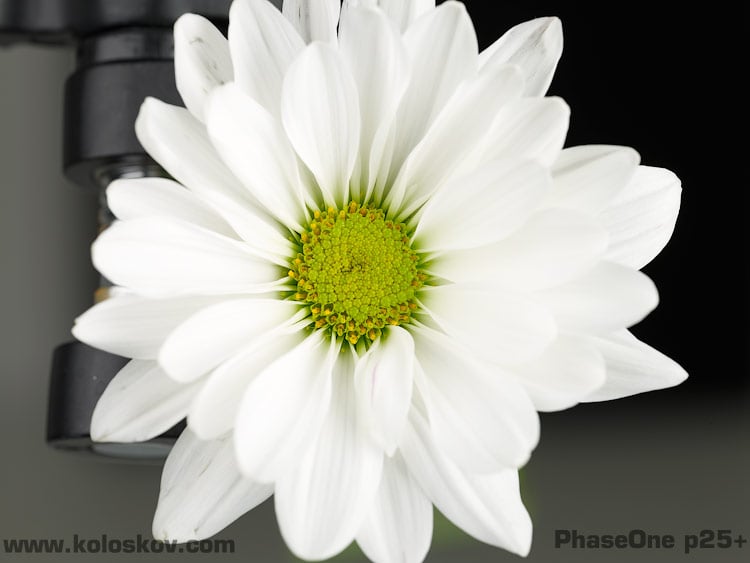 According to camera’s histogram and Lightroom, Canon’s image has slightly less overexposed areas than PhaseOne. However, after RAW conversion PhaseOne shows slightly better details on petals than I see on canon’s image. There was no highlight recovery used on both images. 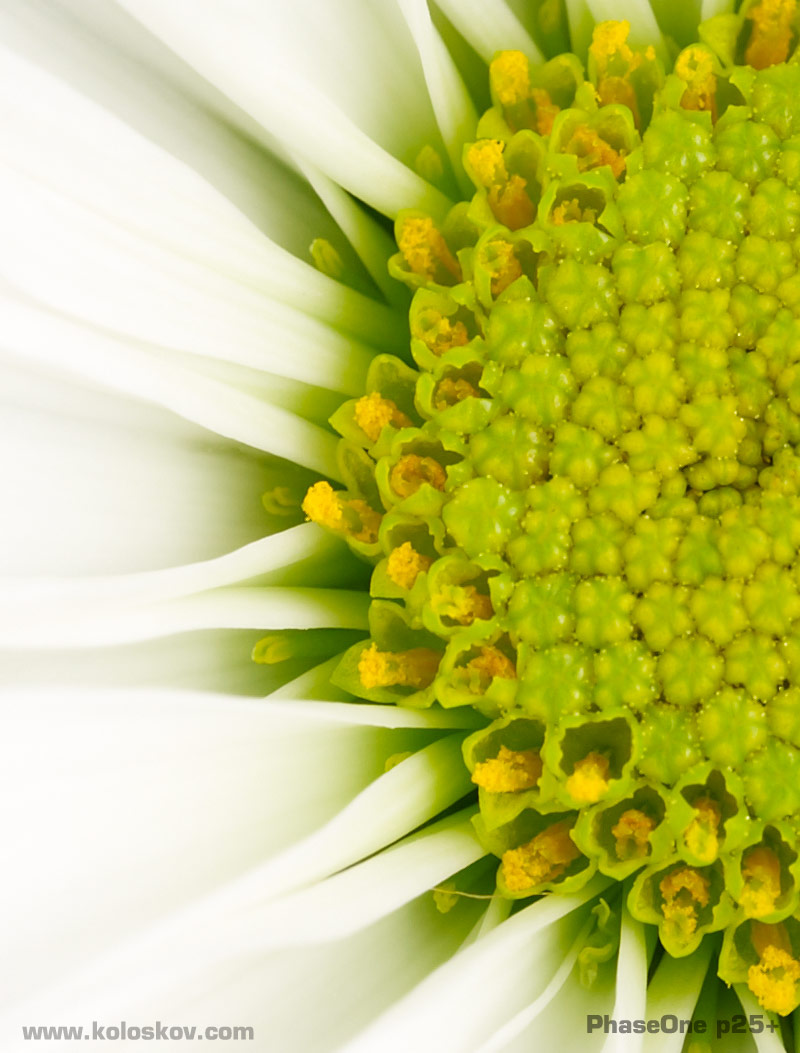 I see slightly more details on the PhaseOne image. Yes, the image is slightly larger,  but not significant to make a difference. This is Anti-Aliasing filter on Canon’s sensor does its “blurring” job:-)

Now, the colors.. Both cameras was set to ‘flash” white balance, and P25+ has delivered correct color right from the camera, no adjustments were necessary. I simply can’t see any different between PhaseOne image and how the flower looks under daylight.
As for Canon.. for some reason the center of flower become yellow instead of green. I’ve managed to partially fix this  by setting up white balance, but… it is sad that Canon was not able to deliver right color as-is. Yes, I could create a color profile for particular shot using X-rite color checker and it should fix the situation, but the whole process of getting the image from Canon won’t be that easy and seamless comparing to PhaseOne. 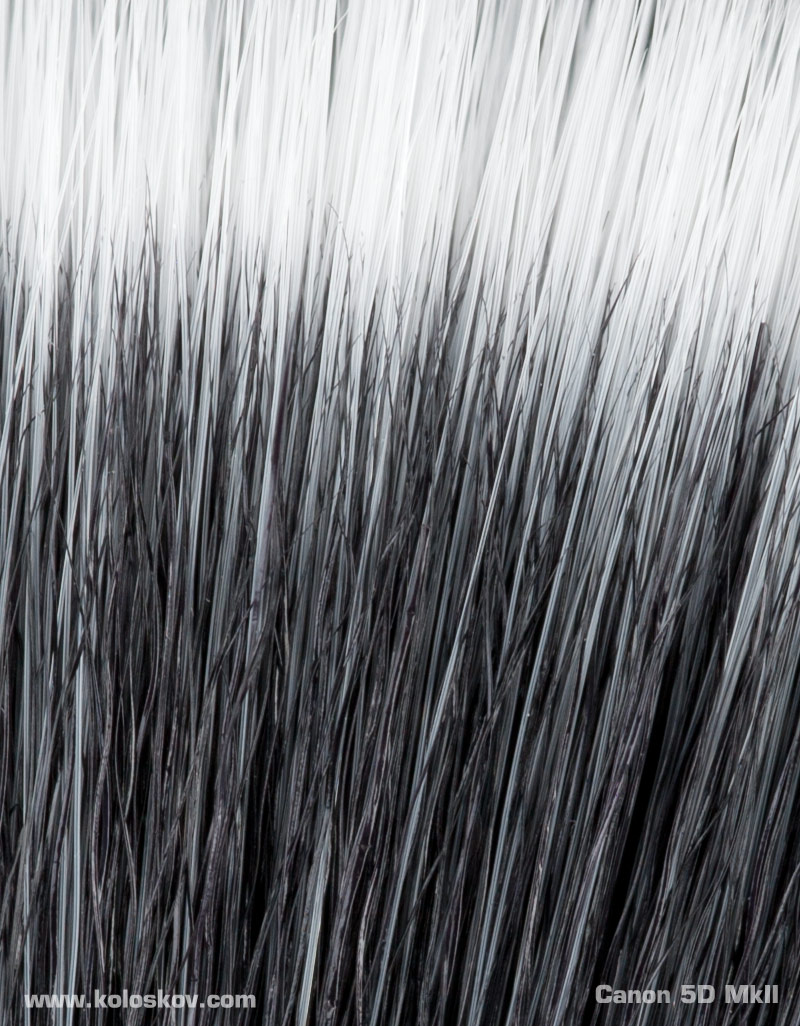 In general, both images almost identical. The only difference I see is on the upper part, where brush hair becomes white. There was a very slight overexposure warnings on both cameras, but again, PhaseOne did a better job delivering more resolution. 16 Bit per color and lack of AA filter made possible to achieve slightly better  result even on a low resolution lens.

The last image came from other tests I did previously, and here I simply shot the same subject with PhaseOne back. Not exactly the same angle, but you’ll see the difference in IQ. More images of the same subject can be found on comparison between canon 5DMKII  and 1DsMKIII I had earlier. 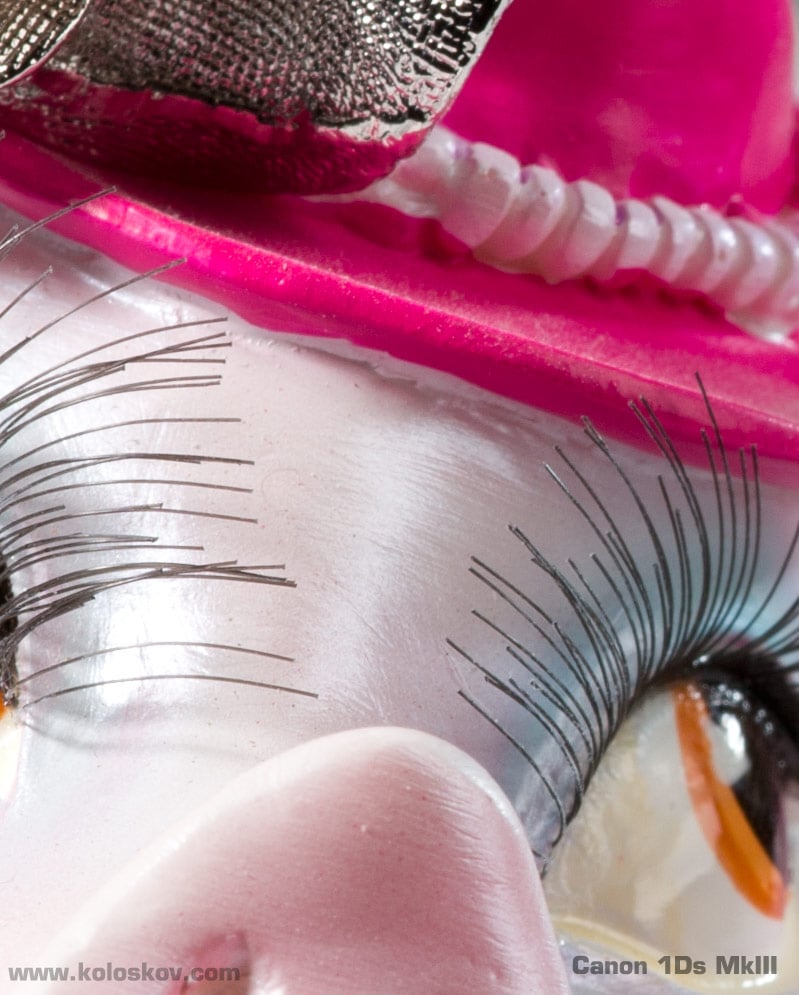 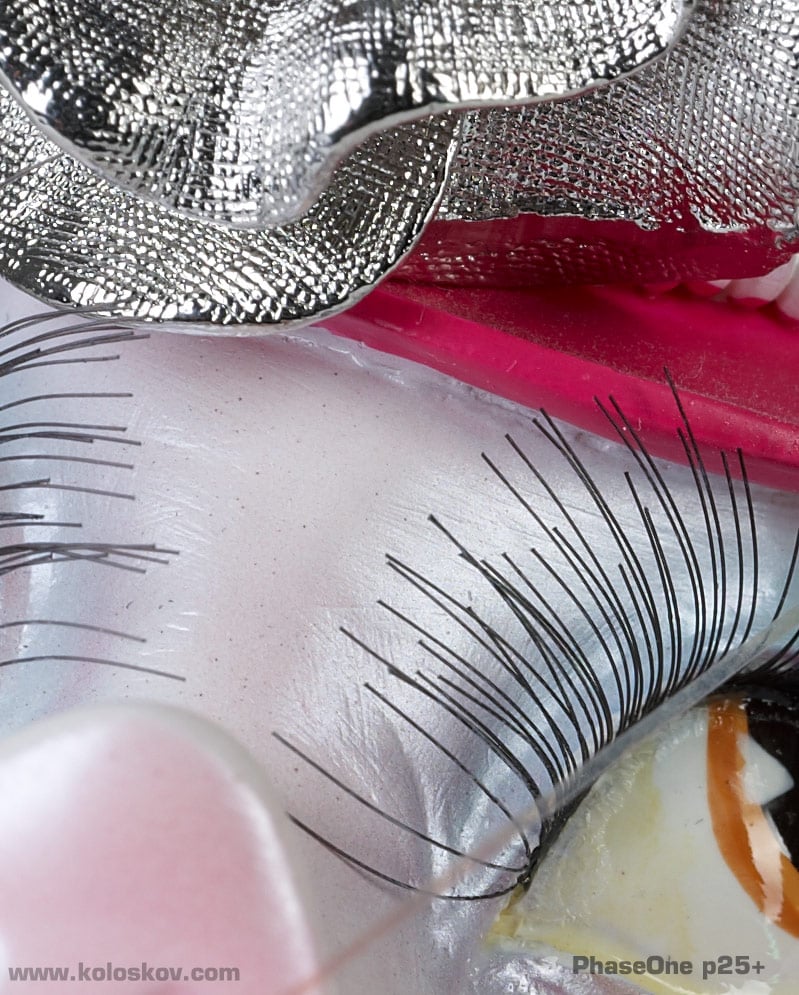 I was not surprised by the results at all, as it confirmed what I already know. I’ve got few photo-sessions with my Cambo Ultima system and I clearly see the superiority of old MF sensor. Not only the resolution, but amazingly correct colors is what I did not have with Canon systems.

Another review you may want to read: Luminous-landscape review

UPDATE: If you’d like to check RAW files from this review, feel free to grab them here.

What next? I am working on a very cool tutorial about the shot you see below where I’ll explain the whole process of getting the image. Step-by-step, from getting first strobe set till the final  composition. Do not want to miss it? Subscribe for the updates now via blog’s RSS feed or articles can be delivered to you by email.

Also, a video from my latest masterclass is ready to be released, next week is a deadline.

If you want to learn about studio photography more, check out our Pro Corner and online store, I have many intersting things for a serious photographer:

Benjamin Franklin:
“An investment in knowledge pays the best interest.”