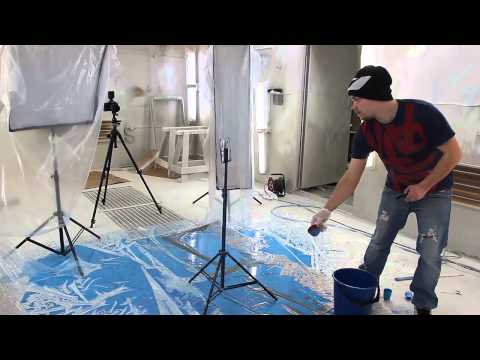 Hi guys! I think most of you guys here at Photigy are inspired by Alex, right? I actually got very inspired by his Milky iPhone splash when I first saw it, and I knew that I wanted to have a shot like this in my photo portfolio. It’s about 7 months since I saw that image and now I finally got to cover my phone with blue paint! 🙂

Gear Used for this Shot:

My brother in law Robert for joining me and taking photos and video from this shot.
My friend Johnny for letting me use his music in the video where I’m throwing liquids!

I bought my Samsung, used, from a guy at a Swedish mobile forum, and with the phone I got a bunch of different battery covers. I love the original one so I put the other covers in a box and stored them in the garage. I then realized that I could use one of them for a shot like this, so I went out to the garage and picked one of them, then I went to the store and bought a new light stand so I had something to glue the cover to. As usual, I’m using the power glue I bought for a shot a few month ago, and I find it to worked really well! I put a string of glue on the top of the light stand, and another strip on the cover. I wanted to have the phone on a slight tilt so I glued the cover a bit tilted to the right, as you can see in the final shot. 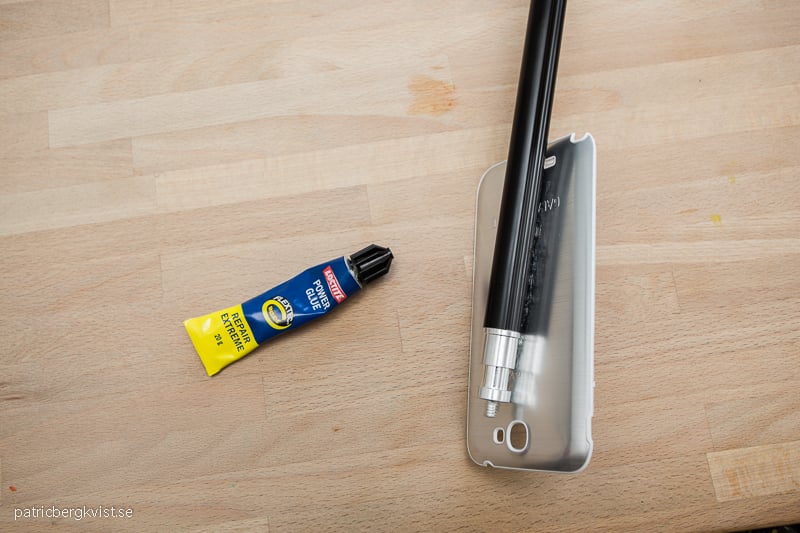 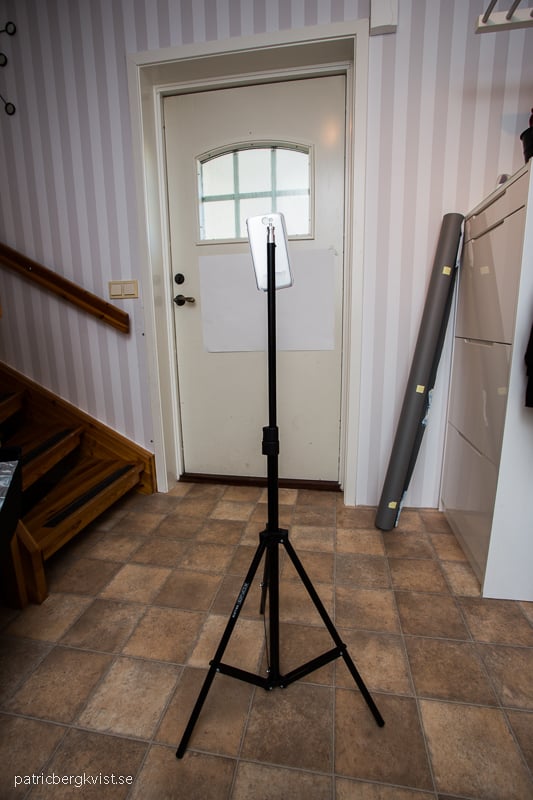 Light stand and battery cover fixed to it)

When the battery cover was fixed to the light stand, I took the phone out of my pocket to remove the screen cover. Why did I do this? I did it because the screen cover doesn’t fit all the way out on the edges of the phone, it ends a liiiiittle bit in from the edges, and when I added lights to the phone those edges would really be disturbing and that would add a bit more post production (this shot was already going to be a massive post production shot) 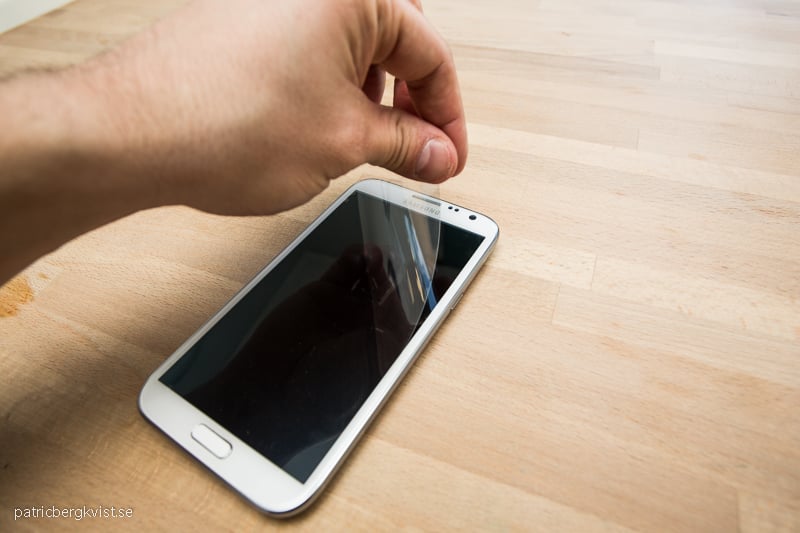 (Removing the screen cover from the phone, as you can see it only covers the display, not the whole front of the phone)

I went to a construction store to get a test bucket of paint. I wanted to have a matching blue color to the phone background I was using. In the store I took the color chart and went trough most of the blue colors before I finally decided which blue color to go for.

When I got home again, and the kids went to bed to sleep, I took the pool inside, and started to cover the walls with plastic when I realized that it was going to be very much work on how to put the flashes to get nice lighting and to fit it in my small hallway. I gave up that idea pretty soon and cleaned up the little plastic I had put up on the wall. I decided to wait a week and then borrow a room at my work (Where I paint kitchen cabinets and doors etc). 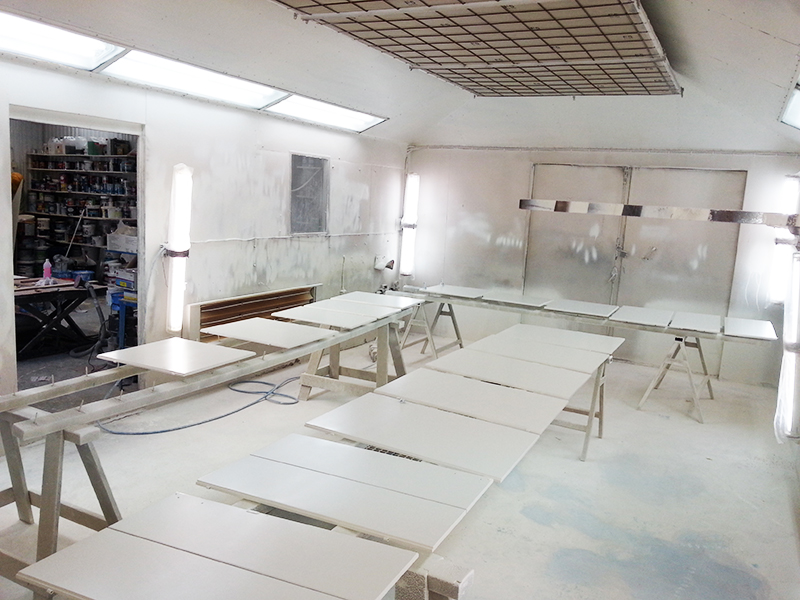 (How this room looks a ordinary day at work, this kitchen was brown a few minutes earlier)

I can tell you guys that I was like a child at Christmas when I got this big place to shoot in! Oh my god, this was so much fun for me! I could concentrate on how to light the subject and not on how to place the flash without it being in the frame for the shot, or how to place the flash so it wouldn’t spill too much light on the background. Now I really want to have my own studio! I haven’t had this much fun in a long time!

For this shot I used two lighting setups. One setup to light the phone, and the other to light the liquids. I did not do big changes in the lightning setup for those shots.
My main idea was to highlight the phone with a 70x70cm softbox from the front, and one 35x140CM stripbox from behind to highlight the edge on the opposite side from the main light and lastly one flash in my homemade grid on the background to make a spot behind the phone. 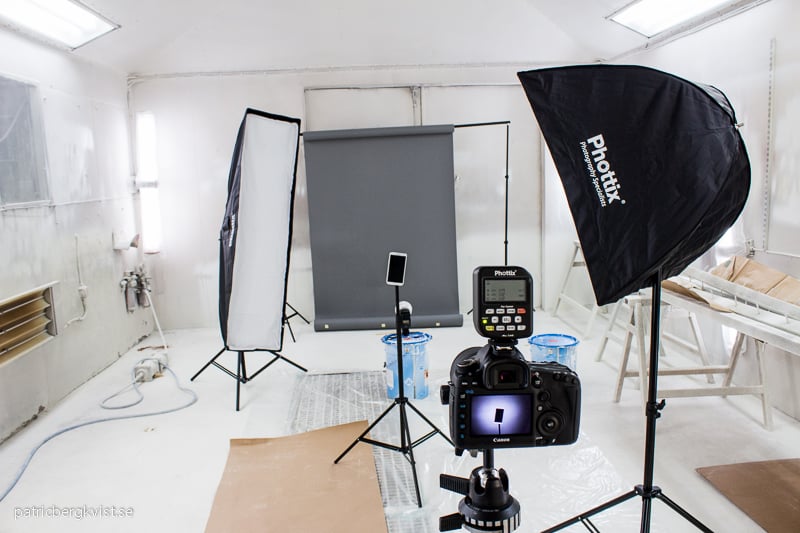 (Lighting Setup for the first shot of the phone)

I forgot the foot for the background flash at home so I had to improvise a little to get it to be stable in the right spot. 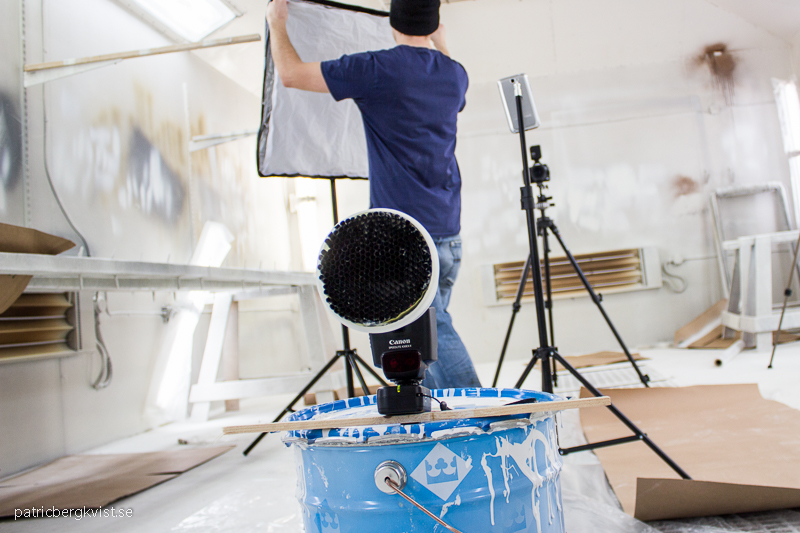 I didn’t know what background color I wanted for this shot, so I tried a few gels. After I had tried a few I realized that I wanted to have a blue color that is brighter then the liquids behind the phone and fade off to darker blue. To make that happen I had to put a few blue gels together in the flash, which means that I had to increase the power of the flash however I couldn’t really do that, because I was already at 1/8 of power (I think my canon flashes work best to freeze motion at 1/8 of the power or lower). The only option I had left then was to increase the ISO, but I always want to shot at as low ISO as possible. The final image is shot with these settings:

As you can see I was already pretty high on the ISO. Sure, noise reduction is pretty easy, but the harder you go there the more detail you will lose. I decided to shoot without any gel on the flash and fix the background in post production. 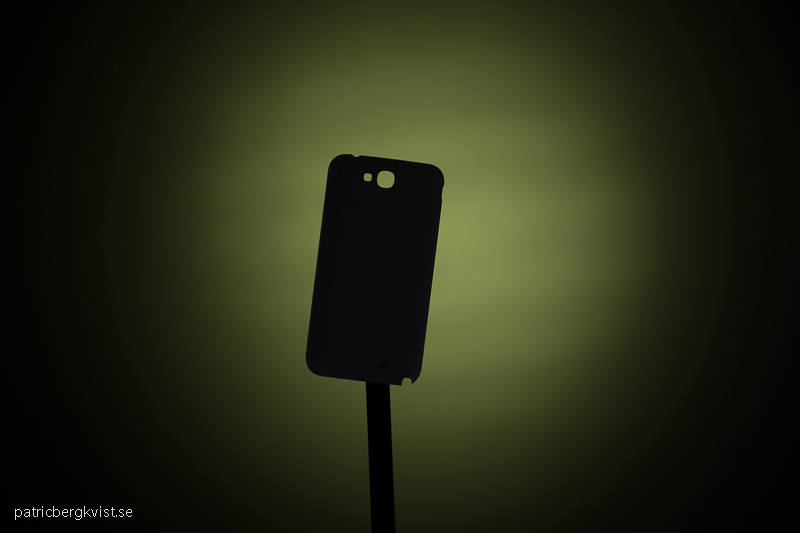 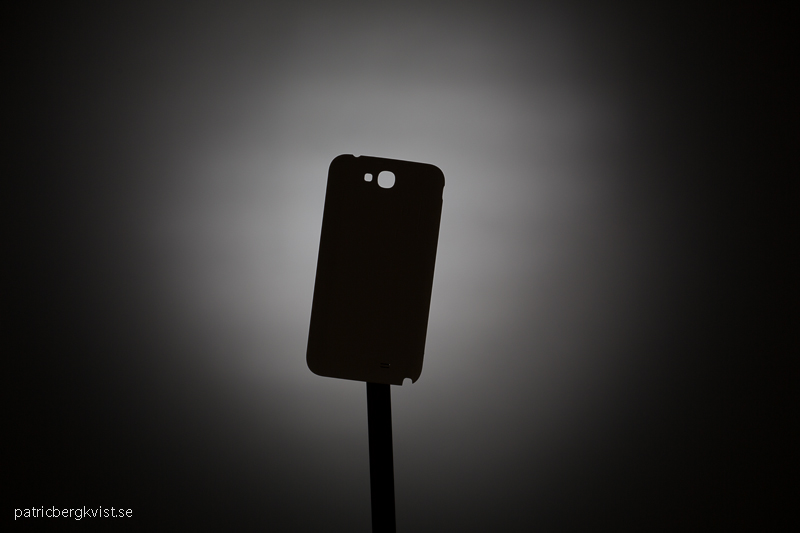 Checking the Depth of Field

When I throw liquids I want to know what depth of field I have, so I know in what angle I should throw the liquids. Throwing the liquids from straight behind the subject towards the camera will result in liquids that are really out of focus, I have made that mistake before with a shot I did of an orange flower, and you can find it HERE

This is NOT an accurate and scientific test. I did this just to get an idea of what area I had to work with when I threw the liquids. I used a folding ruler to see where the area that I should try to keep the liquids within and then I could figure out in which angle I should throw the liquids. 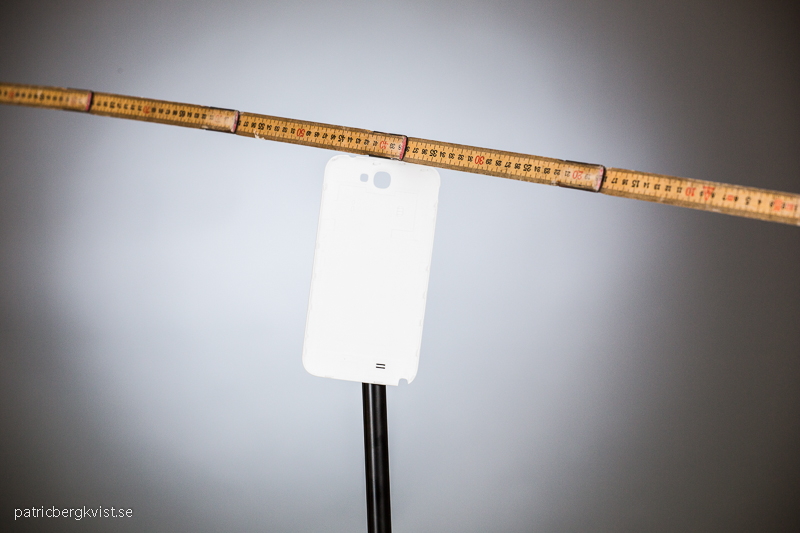 Now it’s time to start shooting the phone with the first setup. I removed the original battery cover from the phone and attached it to the cover that I had glue to the light stand.

I tried different flash settings until I felt happy with the light. Below I will show you the shots that I used for the phone. 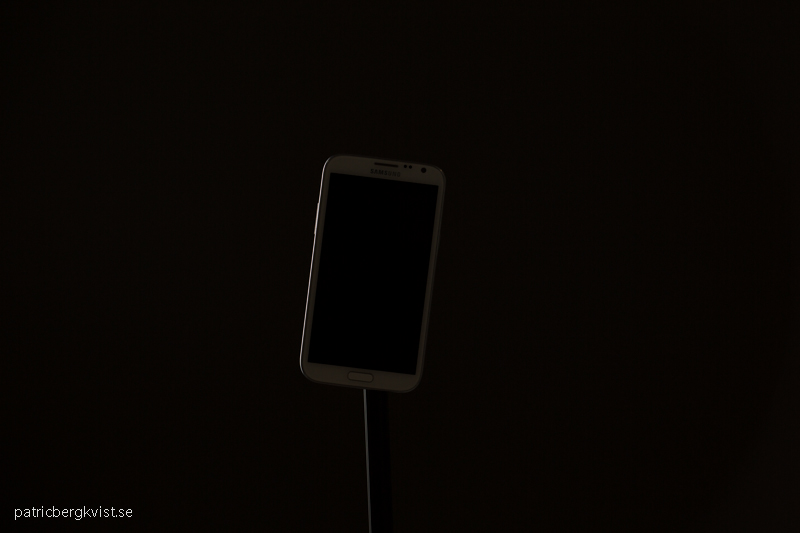 (Only the stripbox from behind the phone, camera left)

(Only 70x70cm softbox in front of the phone, camera right and my brother in law documenting this shot) 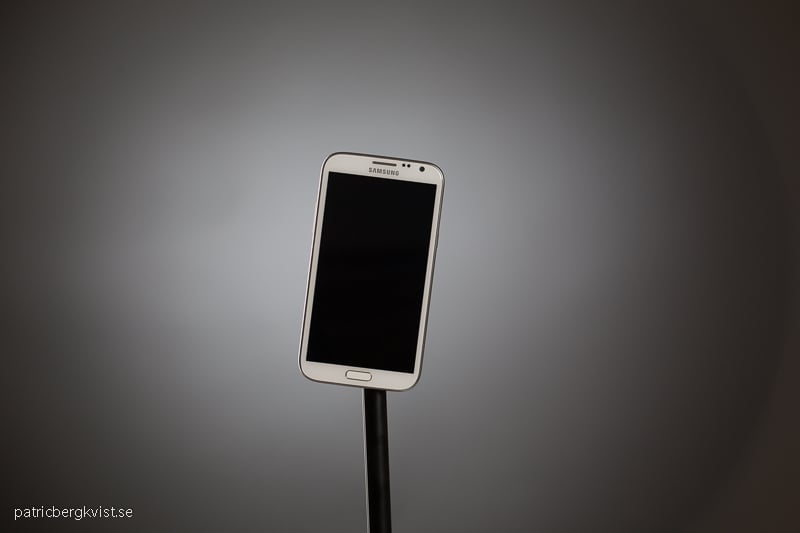 Here I will show you the two images I used for the final shot with some basic adjustments in Lightroom. Since the flashes are much brighter than the display I turned off all flashes and just shot the display. 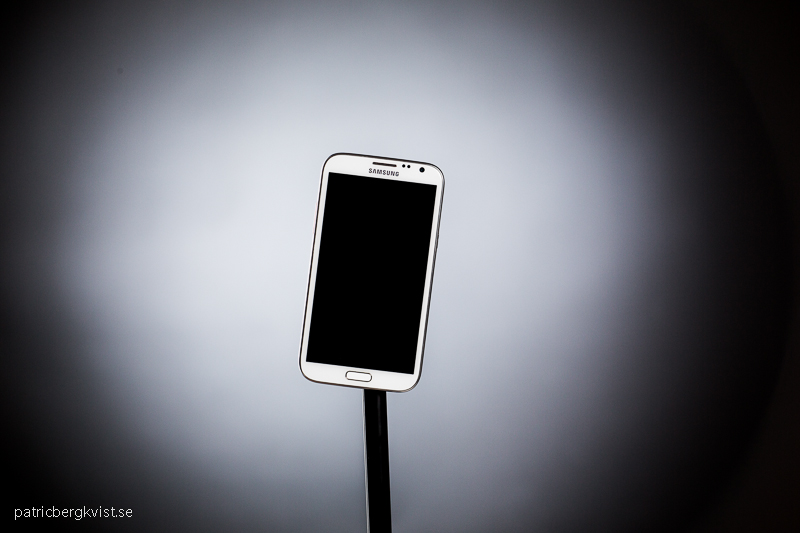 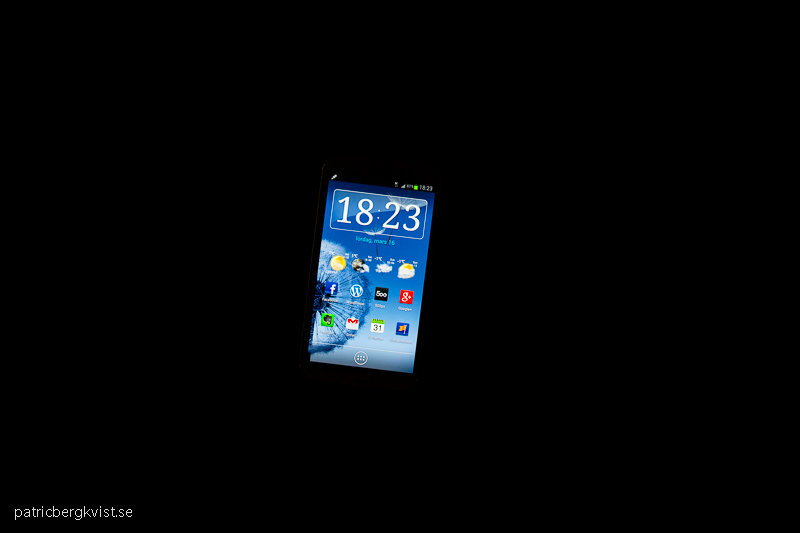 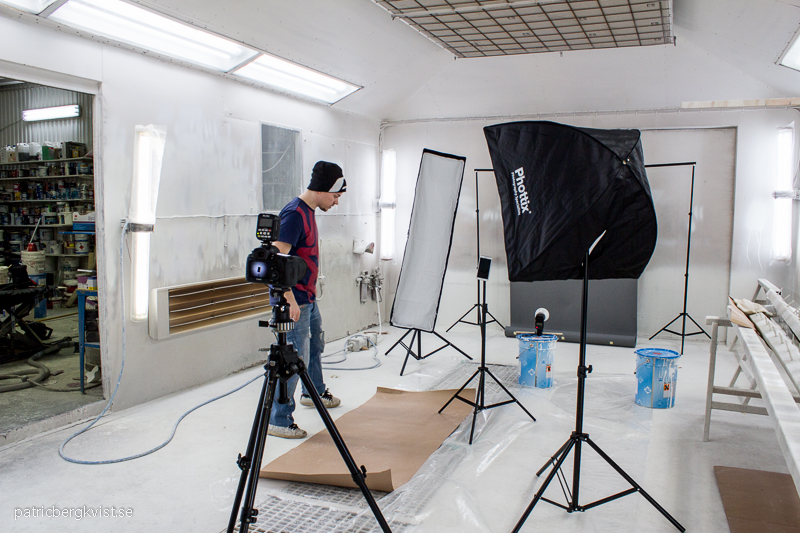 (Setup for the final shot of the phone)

Preparations for the Liquid Part of the Shot

(Covering the softbox with plastic)

(Covering the background flash with plastic)

I mixed the paint with water to get better consistency of the liquid. I used a big bucket and filled it with 7 liters of water and mixed it with the color from the paint.

In the final shot i did pour all the paint in to the water because this mix was a little bit to thin, so it got really transparent. So for the final shot, the mix was about 7 liters of water and ½ liter of blue paint. 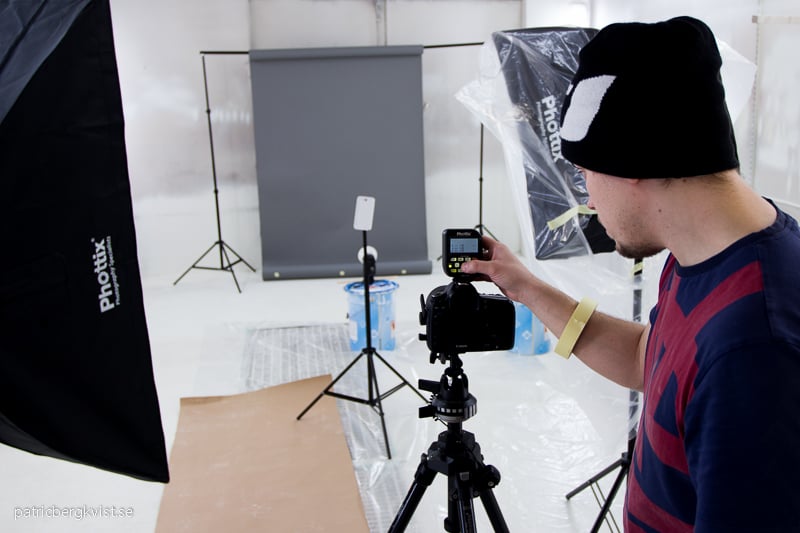 (I’m checking power of the flashes)

Now it is finally time to create some magic! This is the part of the session I have been looking forward to the most during this day 😀

I’m throwing liquids from the left and the right of the stand and also at the top part, the middle part and the lower part of the light stand, and I’m doing this from both sides until I don’t have any liquids left to throw.

Cleaning up the Mess

Ok, now it’s just the boring part of the photo session left to do – cleaning up the mess I have created :S

At this time of the night I am tired and just want to go home and start importing the photos to Lightroom and sort what photos to use and start to edit, but instead I have to start clean up the mess! Especially since I’m not at my own home. 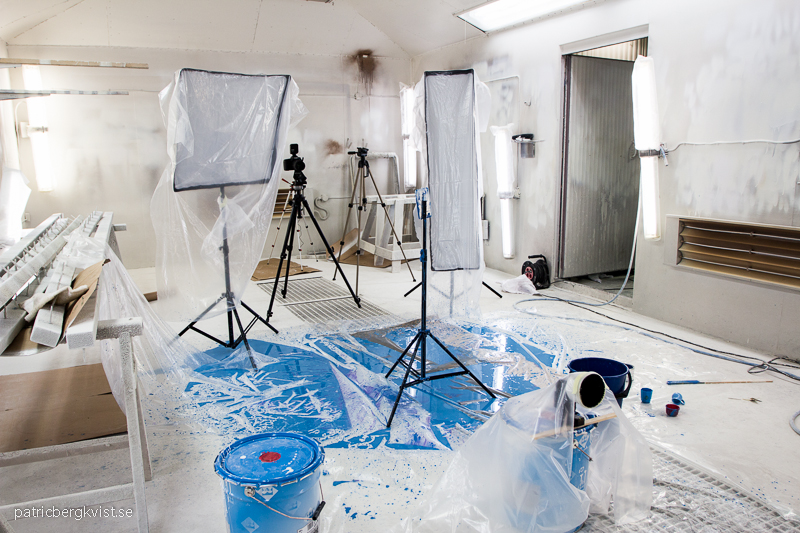 (The mess that you just have been reading about 🙂 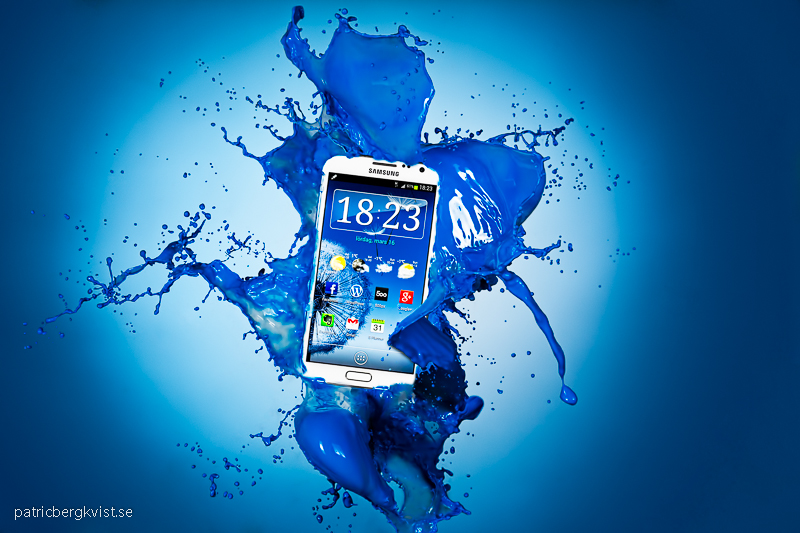 Stay tuned, the Photo Editing will be in the next part.