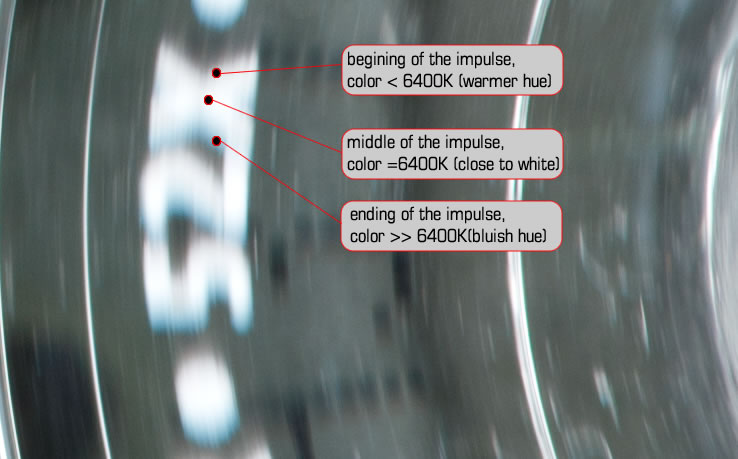 You know, I really like Paul C Buff stuff, I was using his monolights from a beginning of my studio photography. Last summer I’ve got my first pair of Einstein 640 strobes and was very pleased with the performance and most of all, with a stopping power of these digital strobes. Short flash duration was the main reason I’ve stay with PCB lighting.   Since then I did a test of a stopping power of Einsteins (here) and have done few liquid shoots where stopping power was needed. You can see them on my “Mastering splash” post on pixiq.com.

On the last shot, “mastering splash”, I’ve noticed strange:
First, I was trying to shoot splash in a constant color mode (see spec if you are not sure what is this) and noticed that even at about 3000 t.1 (according to unit) I was getting motion blur on some of the droplets. I’ve switched to an action mode, dialed up power to get duration closer to 3000 t.1 (in action mode the same power level gives much faster flash duration)  and was able to continue to shoot without any motion blur.
It was very suspicions for me, as I was throwing the water with  a similar speed, and why in constant color mode, same flash duration, I was getting motion blur?  Than was strange but no conclusion was made as I was not sure that the splash/droplets speed was the same in both, color and  action mode.

Below is the setup for the test. I’ve mounted CD disk on a opened fan’s shaft, and was shooting it when it was spinning and stand still, in both, constant color and action modes. I’ve decided to do a still shots so it will be easy to see the “starting” point of  DOF and focus.

The lighting setup for the test: 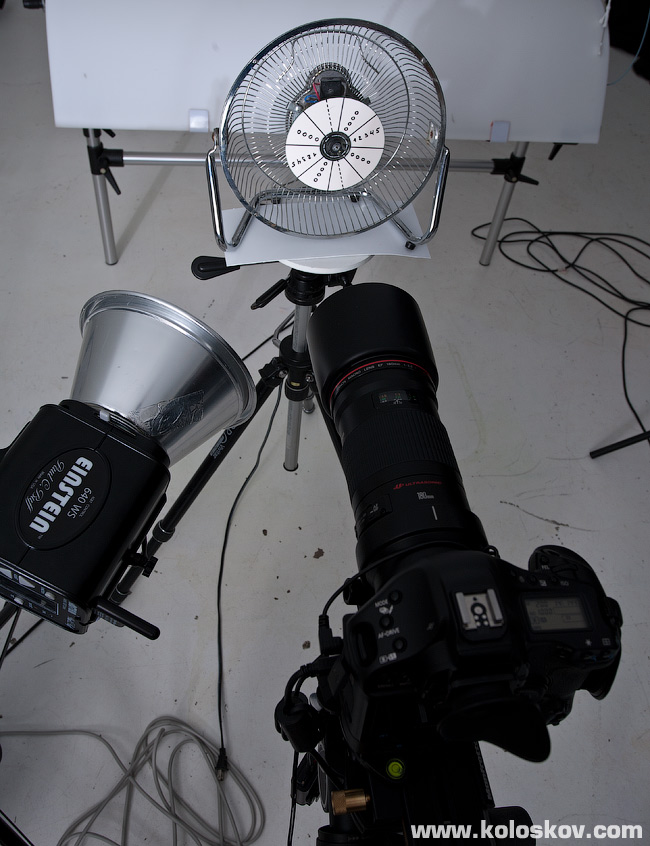 One Einstein 640 light was used.

Because the fan I have was spinning quite fast (faster than I needed, but that was lowest possible speed) , I was dialing minimum possible flash duration in a constant color mode, whihc was 80000 t.1 at 2.5Ws. The closest flash duration in action mode was 7939 t.1 at 56 Ws.
I wanted to have the same DOF through the full test, therefore I was adjusting camera ISO settings to equalize the difference in flash output.
Camera color temp was set to 5600K, shutter 1/200 sec, F14. I had ISO=100 for action mode, ISO=1000 for constant color mode.Was shooting RAW, no adjustment was made in ACR/Photoshop, images as-is from the camera. 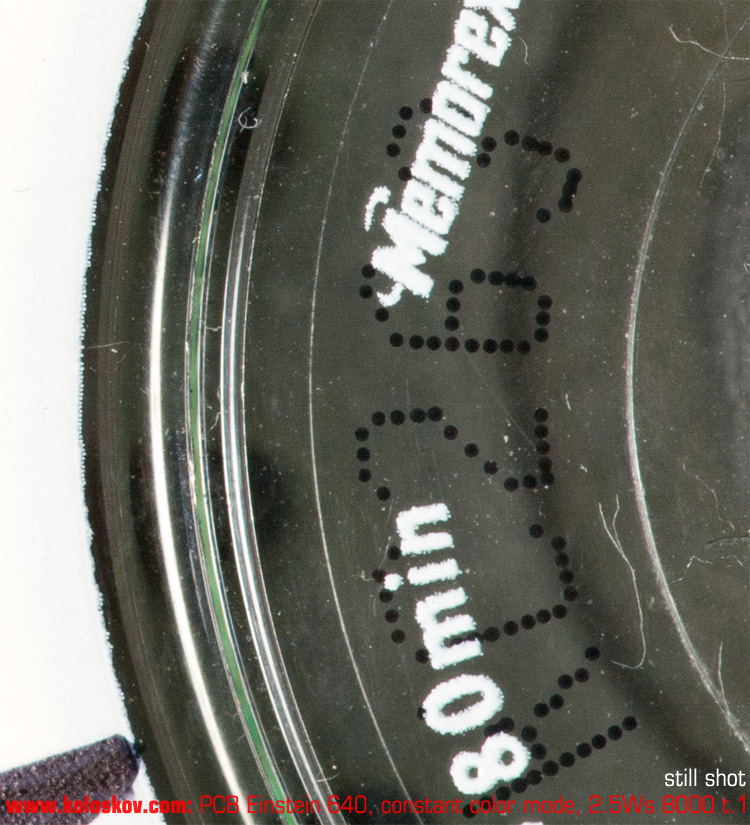 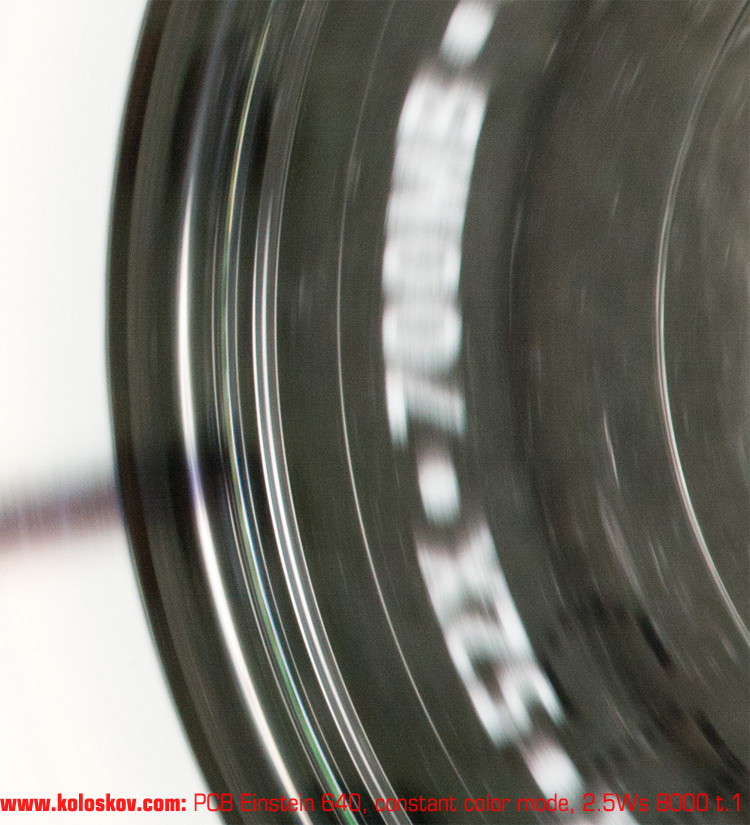 As you see, a spinning speed was too fast even for 1/8000 sec of flash duration, and we got a motion blur.

Still shot, disk was not spinning: 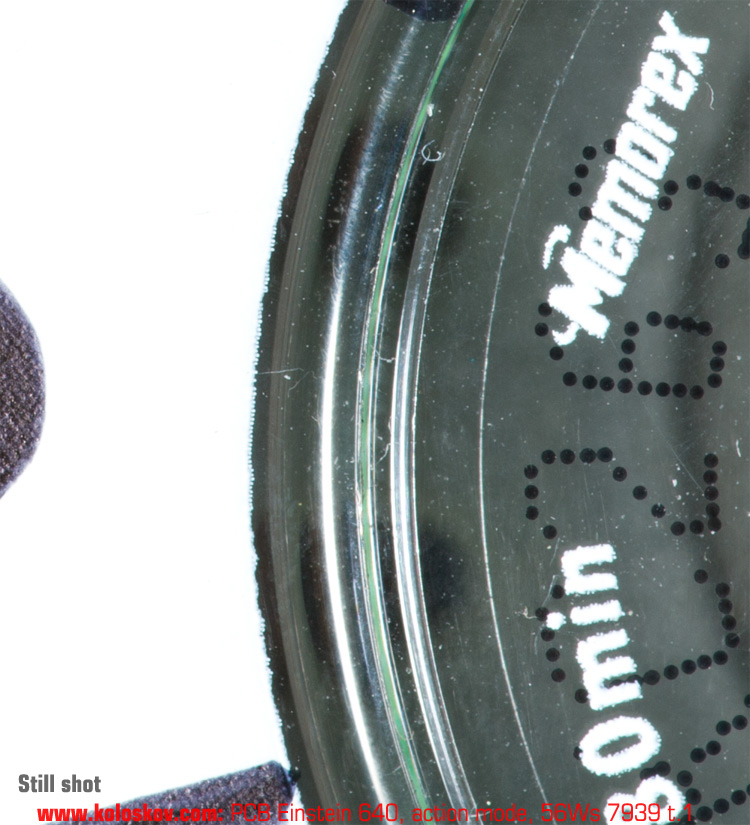 Difference in color temperature is quite visible. Lets see the spinning shot. 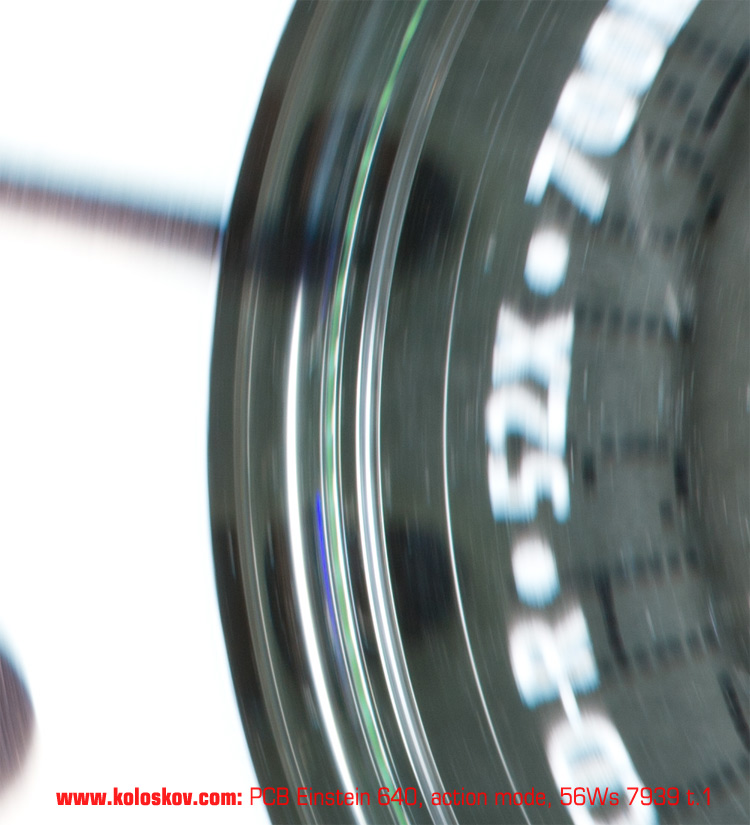 Ok,  here we got something interesting:

I see a bit more freezing action here, comparing to a constant color mode. Despite that claimed flash duration was a little slower (7939 v.s 8000 t.1). However, the difference is not that huge, probably not more than 20%, and it would be cool if I’d have a more precise device to measure duration… But I do not have one.  Do you see the difference in blur?

Anyway, the thing I was afraid of was not really confirmed: claimed value (number displayed on a unit’s display) of duration time is relatively correct in both , action and constant color mode. Obviously, I am talking  about relative values, as I did not measure absolute value of the flash duration in each mode. However, I still think that the constant color mode yields a little longer actual flash duration than claimed (Or, it might be that the action mode give shorter then claimed).

There is another interesting moment I’ve noticed though: color temperature changes in action mode. This is something what I was not aware of. Lets see:

If I look at still and spinning images done in action mode closely (talking about CD spec white text), I clearly see that color temperature does not stay the same during the flash impulse.

Einstein side to side color v.s action mode duration test
To make it more understandable, here is the visual version of what I was trying to explain earlier:

You can look at flash duration charts to imagine how color gets changed during the impulse.

Got a response from Paul Buff, his explanation about color change can be described by this diagram of the impulse (click on it to read the whole article from Broncolor): 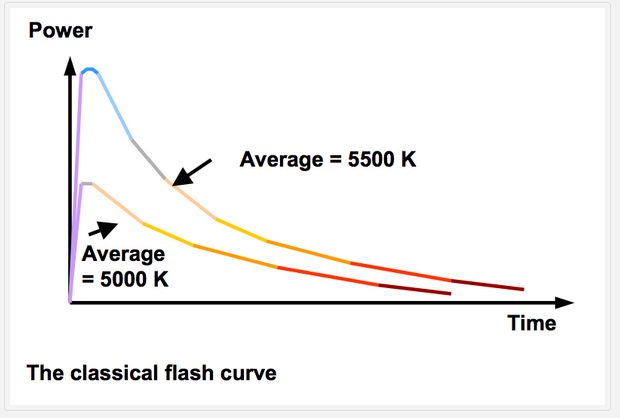 Now, what does it mean for a photographer?

I was always thinking that the problem with different color temperature of the different lights I’ve described above won’t exist if I’ll use PCB Einsteins in action mode having the same  (or very close) power settings on all the lights used for the composition. Meaning color temperature would be the same for all the lights, and it will not a problem to set correct white balance.

Unfortunately, not that easy.

Now it appeared that this is only true when we have still subject, or the moving speed of the subject is slow and all the motion gets “frozen” by the light. All the different spectrum of the flash impulse will be “applied” to the whole subject, resulting the same color temperature across everything.  The different story when we shoot something moving very fast, when even action mode is not enough to freeze the action: In this situation the motion blur will look like a rainbow, starting from ~5000K  at the beginning of the impulse and ending around 8000K. In 90% of the hi-speed action shots this is not a big deal, as action mode SUPPOSE to freeze action, but good to be aware of such thing.

The conclusion I’ve made for myself, while working with Paul C. Buff Einsteins:

At the end, here is how the same disk (same spinning speed) will look at the shortest possible flash duration from Paul C. Buff Einstein 640 unit: 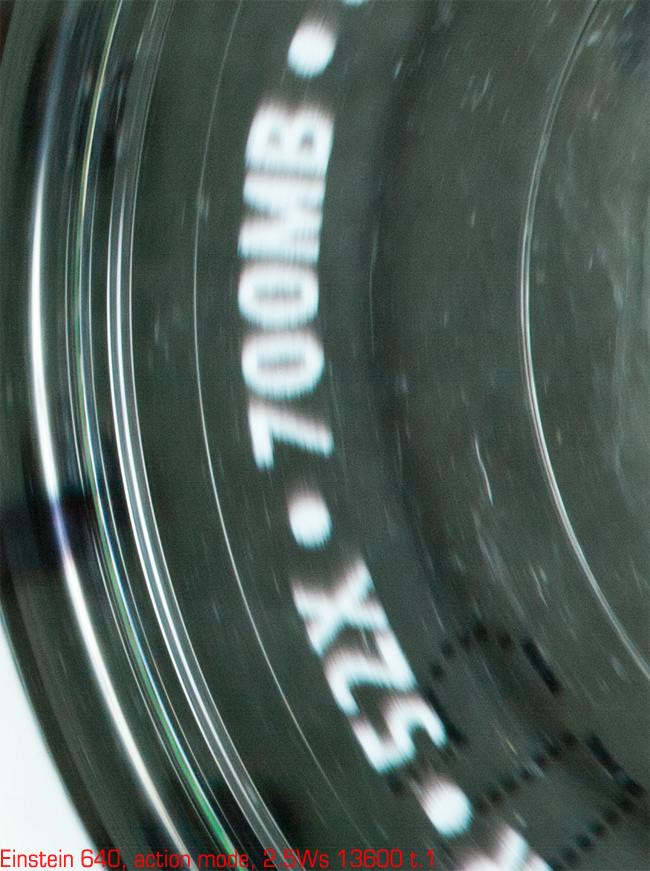 Hope it was interesting. Would be cool to hear Paul’s opinion on this test, hope he’ll comment here.

To make things more interesting, especially for those, who like me was (is) shooting hi-speed action stopping photography with hot-shoe battery powered flashes, I’ve made the series of the tests with Canon 580EX II Speedlite strobe. Same spinning speed, f14, 1/200 , manula mode on a flash: I was going from 1/8 till 1/128 of the power: 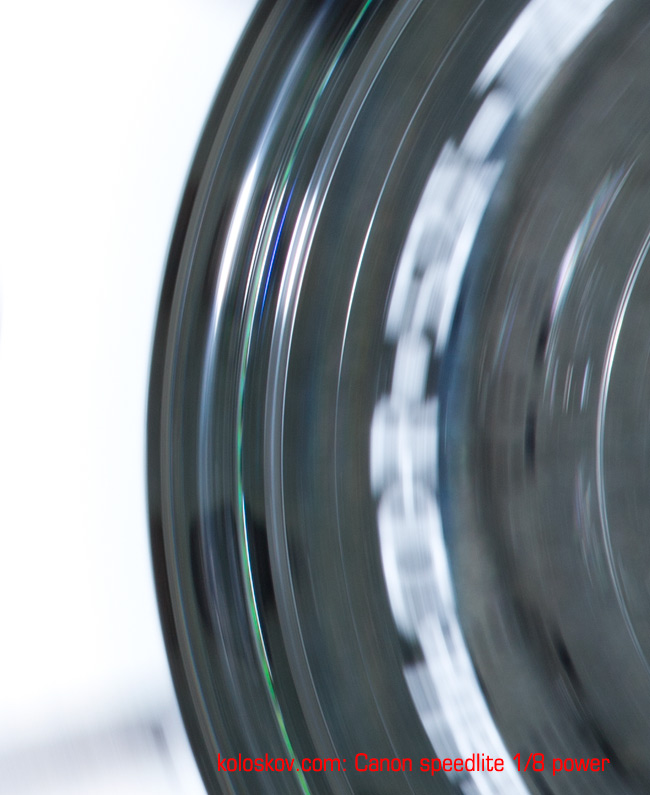 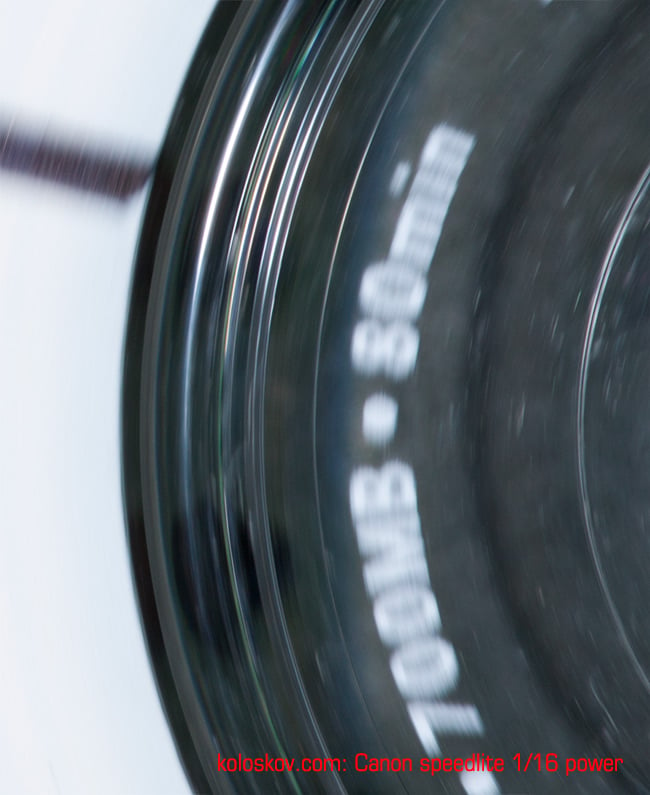 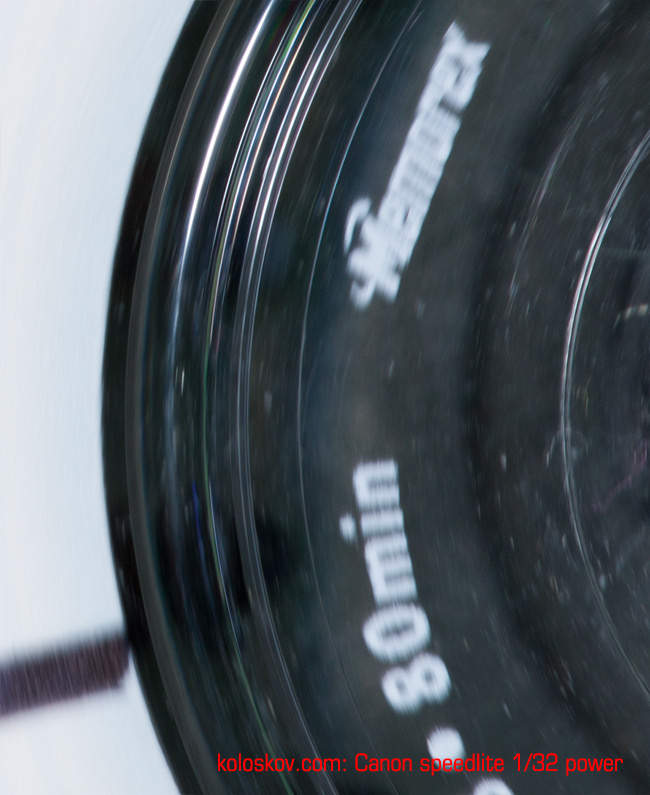 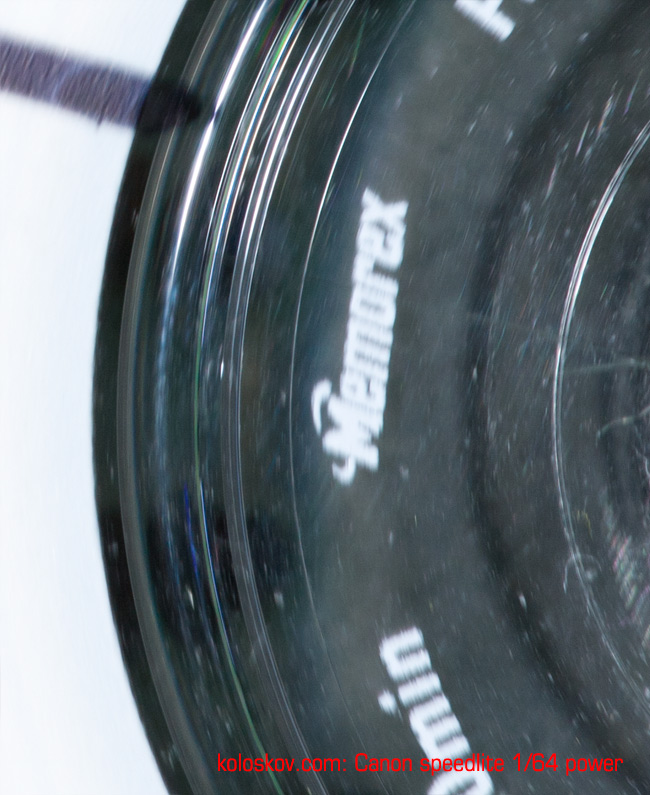 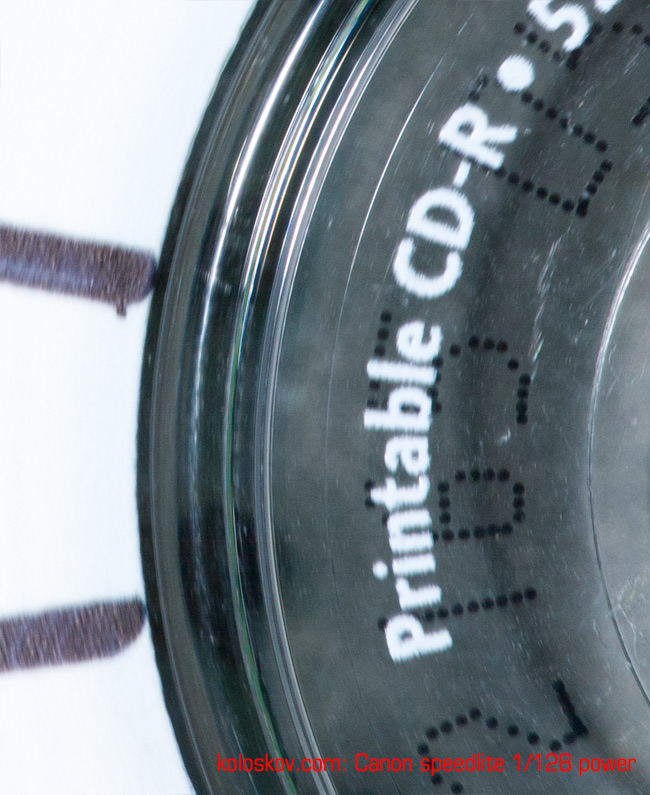 So.. what does it really means? I remember shooting all my “prior Einstein era”  liquid splash images with 3-4 speedlites at 1/8-1/16 power lever, and everything was 100% frozen. As you see on the images above, even at 1/16 power even speedlite can’t stop the spinning disk. Einstein the same  job here (look at action mode image) but with  56 Ws of power! What I can say? Two more E640 units will be ordered tomorrow🙂 -> update: got my second pair of Einsteins next-day delivered!

There is a very interested thread on FredMiranda, forum where I’ve posted results of this test and many interesting opinions were posted (including Paul C. Buff comments). You may want to check it out.